As you can clearly see from our logo, Thetis was a woman; and what a woman she was. Thetis was wooed by two gods (Zeus and Poseidon) but was rejected by both when they learned that Thetis prophesized that she was to have a child who would become greater than either of the two gods.
Peleus, a mortal, married Thetis. Thetis's baby boy was Achilles and she made him immortal by dipping him into the River Styxx but because she held on to his heel to do so, his heel remained unprotected; from this came the saying that a person's vulnerability is their 'Achille's heel.'
So -- how did we decide on Thetis Paddles as our company name - Charlie mentioned her in passing and I loved the name - he was also quick to point out that only women give birth to great warriors (or maybe even great paddlers). Thus the name Thetis Paddles was born. 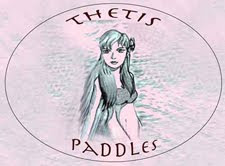 Thetis Paddles began when after years of making my own paddles. For about the last 35 years I have been building cedar strip canoes and racing paddles for my own use and recreational paddles for family and friends. I started using bamboo for my paddle blades just a few years ago and have found that bamboo is the perfect choice for paddle blades because of its durability, looks, and because bamboo is a rapidly renewable resource.

Thetis paddles are handmade by me - start to finish. I use my original designs for my paddles. The basswood and western red cedar shafts on Thetis Paddles provide a comfortable grip; the blades are designed to provide a smooth, reliable, and strong stroke. Unlilke stiff graphite or carbon fiber paddles, my paddles have a slight give to them which reduces fatigue and injury. The combination of woods make for aesthetically pleasing paddles as well and there is nothing better than paddling well than paddling well with a beautiful paddle!

Thetis Paddles is located in central Missouri and is within a day's drive of many rivers, including the "wide Missouri." If you are passing through mid-Missouri, please give me a call. I am always happy to take time to talk boats and paddles!

" I warranty against delamination for the life of the paddle (except in cases of abuse). If you have a problem with any paddle you purchase from me, just send it back and I will repair or replace it for free."

I have not increased my production because I want my paddles to be made by me. I do have some part time help (usually my wife, Melinda), but I do 95% of the work myself. When you order a paddle from me, I will be the one you deal with.

*My main paddle line consists of my bamboo paddles but I am always happy to take special orders for basswood, cedar and walnut paddles as well.